Wi-Fi has become critical to employee activity in both small businesses and larger enterprises. This is a key finding of the “2018 Wi-Fi in South Africa” study, conducted by Ruckus Networks, an ARRIS company, and World Wide Worx.

The report highlights usage, priorities, intentions and attitudes regarding Wi-Fi technology and its deployment in Smart Cities.

“The research reveals the growing importance of Wi-Fi for both business use and local Smart City project roll-outs,” said Arthur Goldstuck, managing director at World Wide Worx. “While the need for Wi-Fi is growing, there are still a few hurdles that South Africa need to overcome if we are to truly reap the benefits of pervasive connectivity.”

Wi-Fi is Critical in Corporations

The research shows that 97% of corporations and 95% of small businesses use Wi-Fi internally, with over half of these respondents stating the need for Wi-Fi access everywhere as very important. This statistic indicates that Wi-Fi has become critical to employee activity and further demonstrates the trends for small businesses are in line with larger enterprises.

Despite the enthusiasm for pervasive Wi-Fi, large businesses in South Africa limit out-of-office use, solely depending on in-house use:

It is a common misconception that, when making a purchasing decision, businesses consider the low cost of a provider’s service above all else. This study shows that this is untrue for Wi-Fi services. Here are our findings for cost, quality, speed and constant connectivity for Wi-Fi:

Our findings for uses of Wi-Fi indicated the following:

These findings suggest that larger enterprises have more clearly defined needs and uses for Wi-Fi.

Respondents were also given the option to rank from 1-10 (with 10 being highest) the level of importance for various features when selecting a service provider. Here are our findings: 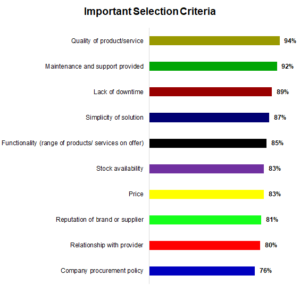 These findings suggest the criticality of quality and service for Wi-Fi deployments. It is clear that most large businesses would rather pay more for a better service, underlining the fact that Wi-Fi has become mission-critical in the corporate environment.

Recognising the Value of Smart Cities

While South Africa is still a long way from having a true Smart City, business decision-makers have a strong awareness of its benefits and 95% believed that wider availability of Wi-Fi would contribute to a Smart City strategy. When asked what the major benefits are of Smart Cities, more than a third cited boosting the economy of a city, while a similar proportion saw it attracting new businesses. Just under a third said it would reduce operating costs.

However, a significant proportion (75.5%) of businesses don’t feature Smart City projects in their budgets. Since Smart Cities is a relatively new concept and no South African city has a clear programme in place to achieve this, the 24.5% proportion of businesses who budget for Smart Cities can be considered relatively high. Even more, a substantial proportion (37.8%) of companies expect to have a budget for Smart City projects in the future.

Our findings for Smart Cities barriers include:

These findings suggest that financial issues are the core challenge facing Smart Cities.

“This research indicates that a strong reliable Wi-Fi network is critical for South African businesses and Smart City deployments,” said Riaan Graham, sales director for Ruckus Networks, sub-Saharan Africa. “Although there are still several hurdles to overcome, it is reassuring to see a widespread belief that Smart Cities can provide value to the economy and citizens, with Wi-Fi as the ‘glue’.”

A Smart City requires strong, reliable information and communication technology infrastructure to support the latest iterations of connectivity. This does not mean fixed-line should fall by the wayside. Instead, being smart requires a cross-platform approach that combines the best of class with the best infrastructure to deliver digital services catering for business and consumer needs.

Ruckus Networks sub-Saharan Africa commission World Wide Worx to conduct a survey around South Africa’s sentiments on Wi-Fi. IT decision-makers at a total of 106 large South African companies participated in the research to ascertain usage, priorities and intentions regarding Wi-Fi technology in their organisations, and attitudes to Smart Cities. Companies in South Africa are defined as “Corporate” when they have more than 100 or 200 staff members, depending on industry sector. This survey uses the 100+ definition, due to the limited number of larger organisations available in South Africa. An additional sample of 20 small and medium businesses (up to 100 employees) were also interviewed to give a “dipstick” view of how small businesses compare with large enterprises in this context.

Ruckus Networks, an ARRIS company, is redefining connectivity around the globe. With our partners, we build secure wired and wireless access networks for organizations that place a premium on connectivity experiences for end-users as well as simplicity for IT.